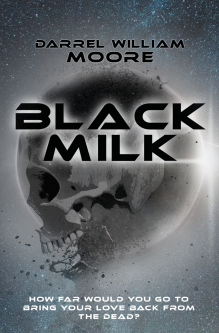 If you’re not a lover of the e-reader, but LOVE sci-fi, you’ll be pleased to hear that Black Milk is now available to purchase in paperback form… meaning you get all 525 pages as ACTUAL paper, PLUS the fantastic cover design on ACTUAL paper too.

Did we mention it’s on ACTUAL paper?

Prometheus has the chance to bring his wife back from the dead, but doing so will mean the destruction of Earth.

Spanning time, planets and dimensions, Black Milk draws to a climactic point in a post-apocalyptic future, where humanity, stranded with no planet to call home, fights to survive against a post-human digital entity that pursues them through the depths of space.

Ystil.3 is an AI unit sent back in time from the distant future to investigate Prometheus’s discovery…

Tom Jones (he’s a HUGE fan!) is an AI trapped inside a digital subspace, lost and desperate to find his way back to his beloved in real-time…

Prometheus must learn the necessity of death or the entire universe will be swallowed by his grief.

Darrel William Moore has loved both books and science fiction from an early age. So much so he’d tell you it was inevitable he began writing the stuff. His influences include Philip K Dick, Dan Simmons, Robert Heinlein and Margaret Attwood; storytelling and world-building at its best. But other sources inspire him too, such as anime, music and cult TV shows like the BBC classic Blake’s 7 and the iconic Buffy the Vampire Slayer. He enjoys creating complex and intriguing characters and then putting them through their paces. His first novel, Black Milk, was released in 2016 and he’s currently working on his next book.